Wrestling games have proven popular with gamers ever since the birth of the original video game systems. WWE SmackDown vs. Raw 2009 proved to be another popular choice, bringing a fresh perspective and new additions to what a wrestling game could be. Developed by Yuke's and published by THQ, WWE SmackDown vs. Raw 2009 brings us new game modes, a roster featuring over 60 wrestlers, 14 different one-on-one game modes, and the Road to Wrestlemania.

Smackdown VS Raw 2009 gives us the ability to take part in six alternative scripted storylines. Each of these storylines lead up to Wrestlemania, and involve different wrestlers. The wrestlers featured are John Cena, Triple H, CM Punk, Chris Jericho, The Undertaker, and a first time tag team storyline featuring Batista and Rey Mysterio.

The cutscenes in between matches are voiced over by real WWE wrestlers, and the drama that we’ve become so accustomed to in wrestling spills over into the game, which fans will no doubt love.

While Legends of WrestleMania is a game that allows you to Pile drive your way to the top, the main attraction here is that you have the ability to play as some of the true greats of wrestling.

The Smackdown VS Raw 2009 career mode enables players to create a character, or take control of an existing wrestler, in order to battle their way up for a shot at the main title belt. There’s a few belts you can try and claim, which include: World Heavyweight, Cruiserweight, WWE, WWE Tag Team, ECW championships, United States, Women's, Intercontinental, Hardcore, and World Tag Team. The create-a-finisher mode is a welcomed feature for any created character. You can now make your own player's finishing move, by using up to 10 alternative animations. The feature isn’t as complex as it could be, it’s actually quite limited, but it’s a great first attempt and has a lot of potential to be a more prominent feature in future games.

As you battle with your opponents, you will unlock stars at the end of each game, these stars are vital for the progression of your player. The number of stars you earn, will be taken from the tally of the total number of stars required to challenge the number one wrestler.Depending on how you performed in the match, your player attributes will also increase. These attribute ratings depend on a number of different factors. In true WWE fashion, playing to the crowd helps, so don’t just beat your opponent, be excessive - taunt them, and slam them through a burning table.

Player attributes such as strength, durability and speed will increase, not just by beating your opponents, but also through the level of entertainment you provide in a match.

As a wrestling fan, Smackdown VS Raw 2009 would have been a great choice, however, other similar games like Def Jam Vendetta and TNA Impact are great games in contrast. Def Jam Vendetta brought something else to the space. Unique, great graphics and strong gameplay.

Vendetta brought together more than 40 different artists from the Def Jam Records label, to battle each other in a series of underground street brawls which are organised by a character known simply as D-Mobb. 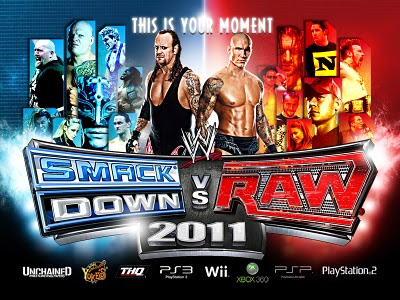 Once you have your opponent on the ropes, you can execute your finishing move in SVR 09, as well as a similar feature in Vendetta, which allows you to link together attacks in order to build up a power bar, which then allows players to carry out a special attack once the bar is full. As well as the numerous game modes of SVR 09, Vendetta also allows the player to take part in different game modes, such as: single, tag-team, handicap, and battle royal.

Smackdown VS Raw 2009 is a fresh take on the wrestling game series. If I was to give the game an overall rating, I would go with 7/10. Despite its new features, it still has a few problems which need to be ironed out.

Overall rating: 7
2Select Quick Download at the bottom of the page
WWE Smackdown vs Raw2009
Alone, you're great, together you're unstoppable - WWE Smackdown Vs. Raw 2009 is the only official mobile game from the world of WWE. Taking the franchise a step further with more slams, more reversals, and a streamlined control system making this the only Wrestling game to own on mobile. You will be able to play or fight all of the biggest superstars from the 3 brands of WWE (Smackdown, RAW and ECW), featuring wrestlers such as; Undertaker, Batista, Edge, John Cena, Randy Orton and CM Punk! All World Wrestling Entertainment programming, talent names, images, likenesses, slogans, wrestling moves, trademarks, logos and copyrights are the exclusive property of World Wrestling Entertainment, Inc. and its subsidiaries.
Report app for spam or abuse!for Android